If I’m Being Honest – Behind The Song 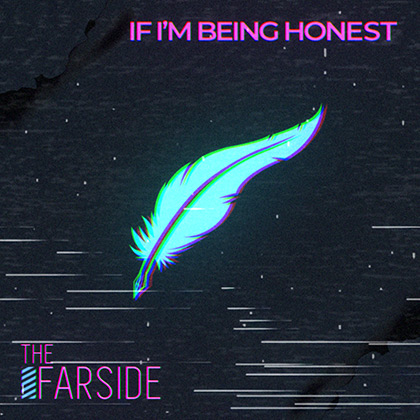 After Aaron and I enjoyed our dinner on that winter evening, I remember feeling inspired to write, so I went home and went straight to work.

As I mentioned earlier, my previous band Wait For It was a huge part of my life for a good six years or so. Some of my best college memories revolve around all those late nights practicing in basements, rented out former school buildings, and at the venues themselves. We met awesome people at the shows, and we got to be a part of a really cool community of bands. Not to mention, Wait For It brought back together so many of my old friends from high school, and it even united all the new friends I made in college. Looking out from the stage and seeing all the support was truly one of the greatest feelings I have ever been fortunate enough to experience. Admittedly, these shows were not massive–I think our biggest show was probably around 250 people. (We aren’t one of those local bands that severely exaggerates attendance numbers. LOL.) Regardless of the size of the crowd, though, hearing anyone sing lyrics you wrote..holy crap…that feeling never dissipates. Looking out into a sea of people and realizing that people chose to spend their weekend listening to me yell off key on a stage…I mean seriously, the sheer simplicity of that statement packs such a punch. Like I said, those were some of the happiest moments of my life. But…what happens when that ends? That’s a question I will attempt to answer in a later post, but it’s also a concept I wrestled with when I walked out of that Greek Diner in December of 2019. My band was pretty much done. It was never spoken–just kind of inferred. (There’s a line you should recognize, especially when you read the next post.) The Farside was a new chapter that had to be written, and I knew where I needed to begin. Usually when it comes to writing lyrics, the process is extremely random and drawn out, often spanning months. The hardest part for me is often just trying to pinpoint the exact story I want to tell, but on that night specifically, everything fell into place pretty quickly.

The chorus for IIBH took me about five minutes. No lie. I just kept asking myself, “What is the FIRST thing you want people to hear when they press play on the first Farside song?” That’s a ton of pressure! I remember sitting up in my bed unsure of how to answer that question, but I finally came to the conclusion that whatever it is, it better be something that means something to me. Something real. Something honest. The phrase, “If I’m Being Honest” came to mind. Soon, that line became the centerpiece for the whole song, and the melody came to me as I was repeating those words in my head. At its core, IIBH is a love song, but not quite in the way one might assume. Most people hear the song and think it’s about a relationship coming to an end. Boy meets girl, boy and girl split, and boy realizes he wants girl back. In all seriousness, this song is an open conversation with music itself–the feeling it gives me–the rush of adrenaline on the stage–the sight of all the people I love in one place. I wanted to chase that feeling again. Setting the song up like a relationship, however, gave me an opportunity to personify my feelings. Making them tangible enabled me to play around with the storytelling itself. The next step for me was to set up the story so it could climax at that chorus.

Admittedly, verses never come to me at a rapid pace. I think the first verse of a song is the most difficult to write because it has to grab attention early and flow seamlessly into the chorus to make logical sense–both musically and lyrically. To accomplish this goal from a lyrical standpoint, I ran with the aforementioned relationship metaphor. Once the lyrics were done, I sent them to Aaron to get his take. We have both put an emphasis on trying to say more with less words–being extremely particular with our diction. In our minds, that simplicity is what makes pop music easily digestible. It’s why you can hear a song once and already know the lyrics by heart. Upon first sight, Aaron thought this song had that simplistic quality to it. When he gave it the green light, the real fun began.

We both agreed that the phrasing of this song, along with the melodies definitely fit the new sound at which we were taking aim. After laying down the basic chord progressions on synth and recording scratch vocals, Aaron and I liked how this song had room to breathe. Aaron had a lot of fun playing in that space to build the song in a multitude of ways. The background percussive elements, for instance, were something new for us. We also put a lot more focus on background vocals. We are huge fans of Marianas Trench, and we have always admired their strategic use of vocals to highlight a heavy section of a song. They stack vocals so effectively for many purposes like swelling into a chorus or breaking silence with a wall of sound. They sometimes use vocals alone to transition into a soft section of a song. As Aaron and I were writing IIBH, we imagined a choir-like timbre to bring some energy to the chorus.

The one roadblock we had when writing IIBH was our inability to create a bridge. We played around with a ton of ideas, but nothing felt quite right. We also didn’t want to just have a soft chorus thrown in there because that felt like a cop out. One of our biggest objectives with The Farside was to avoid being too predictable. There has to be a sense of familiarity with the pop genre, but we felt that repeating the chorus again there would result in losing some substance. Eventually, Aaron had the idea of putting a guitar solo in there, which ended up being my favorite part of the song by far. I love how tasteful it is. A few years ago, we would have been tempted to play something way too fast and unnecessary. I enjoyed how Aaron stayed in the pocket and took what the song gave him. He threw some flair in there for sure, but I think he chose his spots well.

After all the fun of that guitar solo and the facelift to the ending chorus, I’m really pleased with the ending of the song. The instruments cut out, which forces the listener to hone in on the final lyrics. I decided to end with the pre-chorus because after that whole banger of a song, the words here kind of sounded tongue-in-cheek to me for the first time. Before when we said them, that question was genuine.

“Has it really come down to now or never? /

Try to make it out but I’m not that clever… /

It was like two people were really contemplating if this was the end of the road. But from my perspective, I was writing this from a place of self-doubt about music. Had it really come down to now or never? Maybe I wasn’t clever enough to write anything I’d truly be proud of. That’s why repeating that pre-chorus was funny to me. Because I think IIBH proved that we still had a lot left to say, and we were getting a lot more creative about how to say it. That doubt I had wasn’t there anymore. I was confident. I’m not that clever anymore? Yeahhh okay. LOL.